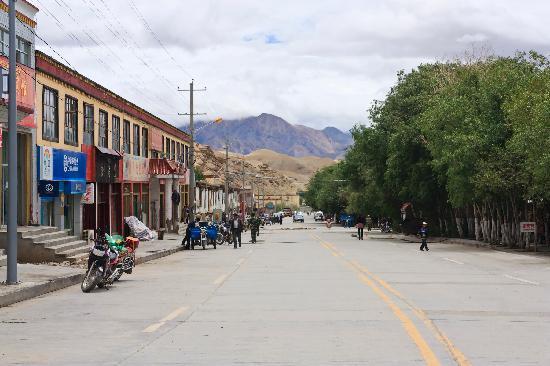 Takllakot is also know as Burang Country & Pulan is the border area connected with Hilsa of Nepal & Lipulekh Pass of India.

Burang, known as Purang in Tibetan, is the administrative center of Burang County, Ngari Prefecture of in the Tibet Autonomous Region (TAR) (China). The town lies at 4,755 metres (13,205 feet) altitude in the valley of the Karnali River. To the south are Gurla Mandhata (Mount Namonanyi) and the Abi Gamin ranges. Lake Manasarovar and Mount Kailash are to the north. This region is the mythological and actual river nexus of the Himalaya with sources of the Indus, Ganges and Yarlung Tsangpo/Brahmaputra all within 110 kilometres (70 mi) of Burang.

Burang is an ancient trading post. It is said to be the place where Sudhana, a previous incarnation of the Buddha, lived.

On a cliff above the town was the large ancient fort of Tegla Kar (Lying Tiger Fort) and Simbiling Monastery (both totally destroyed in 1967 by Chinese artillery during the Cultural Revolution, but the monastery has since been partially restored). Beneath them is the Tsegu Gompa or the “Nine-Storey Monastery” which was probably originally a Bön establishment.Tsegu covers many terraces and may be reached by ladders, and contains many unique and ancient wall-painting, darkened from centuries of smoke.

It seems that the Tegla kar (Lying Tiger fort) was built during the Zhangzhung dynasty which was conquered by the Tibetan king Songtsen Gampo in the early 7th century CE. It became the main fort of the Burang Kingdom, in the 10th century under King Kori, one of the two sons of Tashi Gon, King of the Guge Kingdom. The Burang kingdom is believed to have ended in the 15th century.

Burang is the gateway town for travel to Mount Kailash and Lake Manasarovar to the north. These are important destinations for Bon, Buddhist, Hindu, Jain and even New Age pilgrims. Traditional cosmology designates Mount Kailash the center of the universe. Great religious merit is attributed to parikrama around the mountain, and to bathing in Lake Manasarovar.

Burang is near the borders with India and Nepal. A road leads some 56 kilometres (35 mi) down the Karnali River to the border crossing with China into Hilsa, Nepal (Humla District, Karnali Zone) with a historic trail and now a rough motor road continuing to Simikot. There is also a border crossing into India (Pithoragarh district, Uttarakhand State), over Lipulekh Pass. Beyond the pass the foot trail continues to Dharchula.

Owing to its extreme elevation, Burang’s climate is classified as an alpine climate (Köppen ETH). Winters are frigid but extremely dry, whilst summers are cool and showery due to the influence of monsoonal winds – although the convective influences are lessened at altitudes so high. Minima are below freezing all year round, whilst maxima reach 10 °C or 50 °F only in May before the monsoon makes the summer weather cloudier and colder, with thunder showers and even thundersnow common at this time.