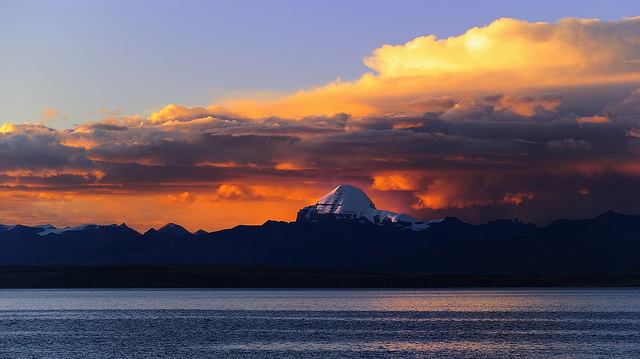 The mountain is located near Lake Manasarovar and Lake Rakshastal, close to the source of some of the longest Asian rivers: the Indus, Sutlej, Brahmaputra, and Karnali also known as Ghaghara (a tributary of the Ganges) in India. Mount Kailash is considered to be sacred in four religions: Hinduism, Buddhism, Bön and Jainism.

Mount Kailash is a Holy Mountain Located in South of Tibet and Considered as the Home of Lord Shiva. Kailash Mountain is considered as very sacred place and People from Hindu, Jain , Budhhist & Bon etc have very good faith in doing the Pilgrimage of Mount Kailash. Every Year Lakhs of Pilgrims  Visit Mount Kailash and Lake Mansarovar. Kailash Mountain is one of the Highest Peak in the world and always covered with snow. It is believed that Lord Shiva stay here with his family and his child Shri Ganesh Ji , lord of IQ. Mount Kaialsh is one of the very difficulat Pilgrimage and its not easy to complete by everyone. The Length of Mount Kailash is approx 55 kms and the circumambulate takes minimum 0f 3 days. First day people go to Darchen to yamdwar and from there go to Deraphuk which is 12 kms trekking and takes around 6 hours , second day people go via dolmala pass and that is the highest point of Kailash and around 5500 metre  and in feet it will be somewhere around 19000  feet  and from dol mala pass people circumambulate to zuthulphuk . Last day people start trekking from zuthulphuk and come to Darchen, the starting point forKailash mountain trekking.  Mount Kilash trekking can only be done by walking or by Horses, there is no any alternate solution for the same. if you were thinking that you will visit by Helicopter or Dolly  to Mount Kailash and lake Mansarover then its not possible till date  until and unless you are Chinese Premier :P. Generally People of India , Tibet & Nepal Considered Kailash Mountain as Very  Very High sacred place and it is often called as Kailash Yatra. If You Do Kailash Trekking with Lake Mansarovar then It is called as Kailash Mansarovar Yatra. Yatra is called as Journey in English .Yatra term is Hindi and sometimes by south Indians it is used as Kailash Yathra. or Kailash Mansarovar Yathra. Since In India  most of the Pilgrims and Population are from Hindu, Budhhist & Jain so Government of India , Ministry of external affairs have introduced Kailash mansarovar Pilgrimage for their citizens. They Have also introduced Mount Kailash Pilgrimage Tours packages through Nathula pass Sikkim & Lipulekh Pass Uttarkhand.  Some stategovernment in India Provides subsidy to their stae citizen but the states ho provide subsidy for kailash mansarovar yatra is very less. Only four or five states provide subsidy for the same. One state is Karnataka another one is Chhatisgarh etc. We have also many Tours Packages for Kailash mansarovar Journey/ Yatra from India/Nepal/ Lhasa ( Tibet) at very reasonable cost. Our Packages for Mount Kailash is value for money and have almost all the facilities and services , which is to be from a reputed tour and travel Operator side. We are the authorized agents  of CIPSC ( China Indai Pilgriamge Service Centre) to organize Kailash mansarovar Yatra. We have Overland packages and Helicopter  Packages from Kathmnadu, Neplaganj & lucknow. When you visit Mount kailash you come across with  Kodari border, Zhangmou, Nyalam, Saga, Dongba/Zongba, Puran, Lhasa, Sighaste, Lahste, Ali, Lake Mansarovar etc. We have Comple Kailash Mansarovar Yatra Packages from all Locations and flexiblility in Payment Plan and choice of dates. In packages Cost almost all things are included like Hotels accommodation, Transportation, Visa Charges, Meals with breakfast, Lunch & dinner, Sherpas, Guides etc. If You are Interested to Book packages for Outer Mount  Kailash or Inner Kora Mount Kailash then you can select from menu option or  you can Downloads all the packages related to kailash Mansarovar Yatra. Om Namag Shivay.