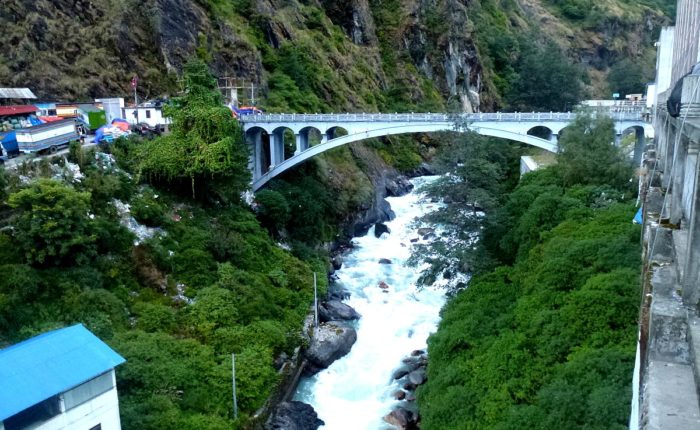 Kodari is a border crossing from Nepal into the Tibet Autonomous Region. Kodari is in Sindhupalchok District, Bagmati Zone. The other side is the town Zhangmu, Dram or Khasa, situated in Nyalam County, Shigatse Prefecture of the Tibet.

In ancient times, it was the starting point of a trans-Himalayan caravan route. Newar traders headed north from Kodari and after crossing Kuti pass turned east to continue their journey across the Tibetan Plateau to Lhasa. The construction of the 115 kilometres (71 mi) Kathmandu-Kodari Road during the 1963-67 period. It was named Araniko Highway in Nepal and China National Highway 318 beyond. As of 2011, Nepal is planning to expand it to six metalled lanes.

China started building a railway in 2008 connecting Lhasa with Zhangmu on the Nepal-China border. It is an extension of the 1,956 kilometres (1,215 mi) Qinghai-Tibet Railway.

In 2012, China signed agreement with Nepal to make this one of six ports of entries between Nepal and China

The 2015 earthquakes essentially closed the route due to numerous landslides and boulders coming down, damaging roads in Nepal and Tibet (China).There was an evacuation and people have been slow to come back, and there is large reduction in trading As of mid-2016, the crossing is still closed. Chinese and Nepali officials met in December 2016 to discuss potential reopening of the port in 2017, which was blocked by progress of road construction.

Kodari is just south of and above the Friendship Bridge border crossing where Araniko Highway becomes China National Highway 318 and immediately passes Zhangmu village in Nyalam County Shigatse Prefecture, Tibet Autonomous Region en route to Shigatse. Before the earthquake, tourists traveling between Nepal and the Tibet make substantial use of this crossing, and there was also substantial trans-border trade.

Chinese trucks traveling on the Tibet-Nepal Friendship Highway offload goods at Zhangmu and transfer them to Nepalese trucks. Even though the drive between Kodari and Kathmandu is only half an hour, the sourcing logistics and bureaucracy of cross-border trade takes around 2 weeks, as such in 2013 it takes each Nepalese truck almost half a month for a round trip