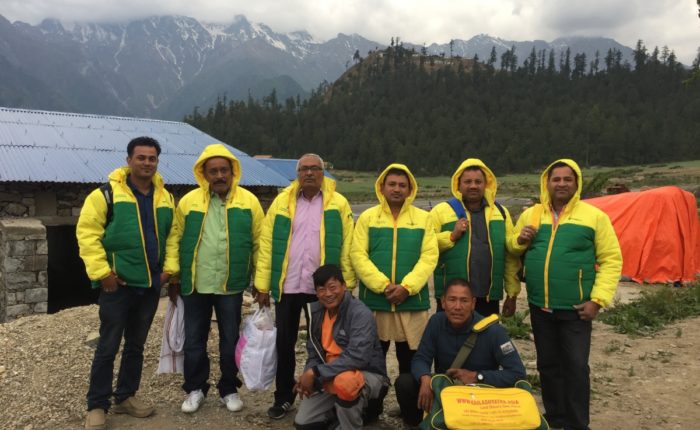 Ans:  Yes.  But He will be Considered as foreigner , so the charges of packages will be different than for Indian Passport Holders.  If you have USA passport than  US $ 360 will be visa charges and for rest of the Country except India & Nepal US $ 260 as visa charges will be extra apart from package cost  in US Dollar. Any country citizen, holding a valid  passport and aged at least 10 years and below 69 years as on 1st May, is eligible to apply for the Yatra.

2 Que: Similar yatras are conducted by Government also, which complete in  23 days. What is the difference between the one conducted by the Government of India and those conducted by private agencies, Also explain why indian govt tour is expensive than Private tour? Ans :  Private Agencies Conducted tour From Kathmandu ( Nepal) Route which is cheaper and Nearer to Mt Kilash, that is why it takes only 13 days and cost is very less than Indian Govt Mea Tours packages. Private Tour Costs Less Becaue China Govt ( CIPSC)  takes Registration fee in Us Dollar from Each Pilgrim. if You go from Nepal route than it is Very less as comapre to Indian route, that is why Private tour is cheaper than Govt Tour.

3. Que : Is there any subsidy given to Kailash Manasarovar Pilgrims? Ans : No. A few of Indian States – including Chhattisgarh, Delhi, Gujarat, Karnataka, Madhya Pradesh and Uttarakhand – of their own, directly provide varied sums of money to their residents to cover a part of their Yatra expenses. For Subsidy Amount Please Directly contact with Govt . We cannot  Help to get your subsidy.

4. Que : Do i Need Medical Certificate For the Yatra ? Ans :  Yes.  But it is not compulsion from the China Government. But for your safety & satisfaction, it is required. If you give us Medical certificate from any Recognized MBBS doctor, then it will be easy for us  to conduct Yatra. Sometimes The yatri who fails to bring medical certificate , they are stopped by Chinese authority  to proceed further.

5. Que : Are the food and accommodation arrangements made during the Yatra? What is the estimated expenditure per yatri? Ans : On the Nepal side of the Yatra, we makes the transport, logistical and food arrangements  respectively. In Tibet, the Chinese authorities provide transport and logistical support, only Meals are cooked by our sherpas. For estimated expenditure per yatri, please visit our website and go through Packages cost.

6. Que : If the Body Mass Index (BMI) of a person is over 27, will he/she be eligible? Ans : Fitness for the Yatra depends on many other factors of one’s health. If a person is otherwise found fit and healthy after comprehensive medical examinations, doctors should not be much rigid about his/her BMI. Nevertheless, one should try, in the meanwhile, to bring down the BMI level to 27 or less to add to one’s overall fitness.

7. Que : Is Mount Kailash Parikrama the only form of trekking involved in the Yatra? Or, is there any additional trekking involved during the entire Yatra? Ans : There is a trekking of about 35 km through  Kathmandu route during the whole Kailash Manasarovar Yatra. For details please see the itinerary . If you go through govt or Private tour, Minimum trekking is 35-45 km and that is compulsory , if you are interested to trek . Only two options can be used to trek , one is by Own and second is By Horses, apart from this there is no any option to trek . Dont think Helicopter packages will help to complete your trek. Helicopter will help you toi cross only Nepal border to enter into tibet, not for MT kailash Trekking.

8.Que : Why are yatris required to undergo  medical examinations ? Ans : Yatris are required to trek through high altitude areas. In such places, the atmospheric air is under low pressure and people suffer due to effect of Hypoxia (low level of oxygen). In the rarefied atmospheric conditions, a yatri may develop diseases like pulmonary edema/cerebral edema and acute mountain sickness, etc. Individuals who are suffering from coronary artery diseases, various lung diseases like bronchial asthma, hypertension and diabetes, may collapse and die. As such, yatris are reuired to get medical certificate before they are inducted into high altitudes.

9. Que : Will the medical Certificate, guarantee that yatris  is fit to undergo yatra & will not suffer from pulmonary oedema, etc? Ans : No. Any of the yatris may still become a victim of high altitude diseases.

10 Que : Is there any age factor for yatris? Ans : It is recommended that no one should be inducted into high altitudes after the age of 70 years, as one cannot generally acclimatize properly and cope with the stress at such advanced age. It is also observed that some young persons in age group of 19-30 years are more prone to high altitude diseases than persons in older age groups.

11 Que : Why are younger persons more prone to HAPE? Ans : Exact cause is not known. It is believed that younger persons are less inclined to respect the rules of acclimatization due to a false sense of bravado.

13 Que : How can one become a fit yatri? Ans : A yatri should be free from all major ailments like heart diseases, asthma, epilepsy, diabetes, hypertension, menstrual disorders, cancers, etc. Yatris are advised to bring their weight to average standards, exercise regularly, do breathing exercises, and quit tobacco, alcohol, etc. A doctor may be consulted to rule out any major ailments that may render one unfit for the Yatra.

14 Que : Are the medical examinations carried out by ourself, the only medical examinations that the yatris have to undergo and qualify? Ans : Almost Yes For Private Tours.. Applicants are required to undergo tests for Tread Mill Stress Test, Blood Pressure and Blood Sugar for Fasting and Non-Fasting conditions at competent health centers of their choice and carry these medical test results with them during the Yatra.

15 Que : What happens if a yatri falls sick en route? Ans : If a yatri suffers from minor ailments, there are medical and paramedical staffs on the Nepal side to provide relief. Our Tour  in Tibet Side well-equipped and has HAPO bags where inside pressure can be equal or more than sea level. But should a yatri suffer from any major health problem, he/she may need to be evacuated to a hospital by helicopter at his/her own cost. However, due to administrative procedure involving the Chinese side and due to difficult climatic and geographical conditions, such evacuation from the Chinese side may take time – at least 48 hours. Therefore, yatris should ensure that they are truly confident of their health and physical fitness before they undertake this Yatra.

16 Que : Should yatris carry the prescribed medicines, which they have been taking regularly on the advice of their doctors? Ans : Yes. Yatris are advised to take sufficient stock of their medicines to last the entire duration of the Yatra. They may discuss this matter with their doctors also.

17 Que : Why does  Private Agencies/ You  charge non-refundable amount of Rs. 15,000/- minimum  from yatris? Ans : We  provides logistical support to yatris on the Nepali side of the Yatra and Meals in Tibet Side. We make arrangements for food, shelter, security, medical euipments, transportation, guide, porters, etc, well in advance at a cost. As a result, even if one does not perform the Yatra eventually, the expenditure cannot be reimbursed.

18 Que : If any yatri is rejected on medical ground, can he/she be considered for kailash tour on recovery from the medical conditions?Ans : No. The Kailash-Manasarovar region hardly has any satisfactory medical facilities and it is very difficult to airlift a person to India for immediate specialized medical treatment. Therefore, as a measure of caution and prudence, if a yatri is once declared medically unfit, he/she is not allowed to participate in the Yatra during that year in his/her own interest.

19 Que : What are the parameters for selection of Yatris? Ans : An Country citizen, holding a valid Indian passport and aged at least 10 years and below 70 years as on 1st April, 2016 is eligible to apply for the Kailash Manasarovar Yatra. PIO/OCI card holders are considered foreigner not Indian.

20 Que. How much of trekking is involved in the route via Kodari Border Route , Kathmandu? Ans. The route through Kodari involves trekking of about 35 km same as Nathula Pass Sikkim India..

21 Que. As Kathmandu  is a motorable route, is a person above 70 years, who is medically fit, allowed to go on Yatra? Ans. No. It is recommended that no one should be inducted into high altitudes after the age of 70 years, as one cannot generally acclimatize properly and cope with the stress at such advanced age.