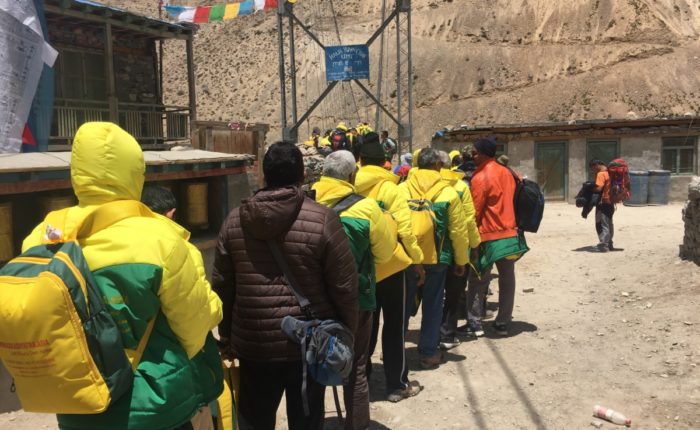 Hilsa (Nepali: हिल्सा, hilsā) is a town on the northwestern corner of Nepal bordering Tibet Autonomous Region (China) where the Humla Karnali crosses from the Tibetan Plateau into the mountain regions on its descent to the Ganges. Hilsa is in Humla District, Karnali Zone facing Burang County, Ngari the westernmost prefecture of the T.A.R.

From Hilsa a rough road extends 51 kilometres (32 mi) into Nepal as far as Simikot. From Simikot transport onward to the rest of Nepal is on foot or by air, therefore goods arriving from the south are expensive. Goods trucked in through the T.A.R. are cheaper despite the long distances from China’s coastal factories. Government of Nepal operates a customs checkpost in Hilsa, mainly to levy duties.

Across the bridge that is the actual border point, Chinese officials concern themselves with the movement of people. Ethnic Tibetans are largely barred from seeking refuge in Nepal and India. Admission to T.A.R. is only granted to groups who acquire liaison officers at the border. Visitors are mainly tourists and pilgrims of the Bon, Buddhist, Hindu, Jain and even New Age faiths bound for Lake Manasarovar and Mount Kailash. Beyond Hilsa they proceed by road some 56 kilometres (35 mi) up the Karnali to Burang Town, known to Nepalis and Indians as Taklakot (तकलाकोट, taklākoț). It is the main staging point for excursions to the holy lake and mountain.