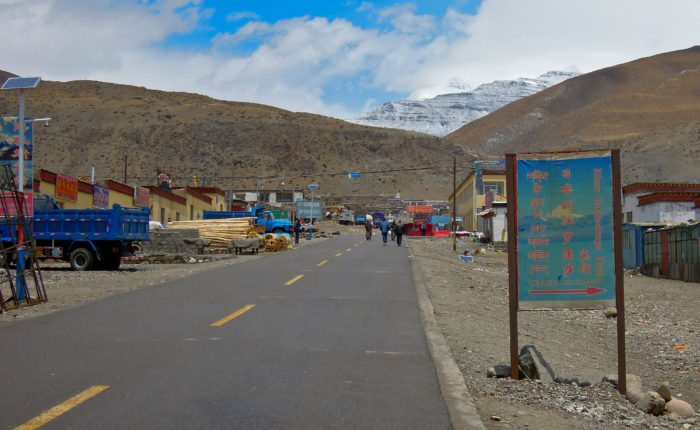 Darchen,Tarchan or Taqin (simplified Chinese: 塔钦; traditional Chinese: 塔欽; pinyin: tǎqīn) is a small village in Purang County of the Tibet Autonomous Region of China. It was previously known as Lhara and still signposted as such. It was previously an important sheep station for nomads and their flocks and had only two permanent buildings; only one of which survived the Cultural Revolution and is now used to house Tibetan pilgrims.

Darchen is situated right in front of the sacred mountain, Mount Kailash. Its altitude is 4,575 metres (15,010 ft) and is the starting point for pilgrimages in the region.

It is only a one-day bus drive (about 330 km) from the town of Shiquanhe or (Ali) to the northeast, where Gunsa Airport, opened 1 July 2010, is located, offering flights twice a week to Lhasa and Chengdu.

It contains a couple of restaurants and the Ganges guesthouse and restaurant, the Zhusu guesthouse next door, and the Gandise Hotel where Public Security Bureau (PSB) officers are stationed from spring until October, and where pilgrims must get their travel permit stamped, and buy a “ticket” if they wish to circumambulate Mt. Kailash. There are also a few houses, the Swiss-funded Tibetan Medical and Astro Institute and dispensary where doctors are trained in Tibetan medicine, a number of stores and kiosks, and some camping grounds. Traditionally, pilgrims only eat vegetarian food in the region due to its proximity to the sacred Lake Manasarovar and Mount Kailash.

Darchen was once an exclave of Bhutan, held for almost 300 years, when the People’s Republic of China annexed it in 1959